I hope you are enjoying the Winter holidays!

Dec. 28 will be the last day for orders at my Etsy store for 2015! All purchases will be mailed before the end of the year.

The Metapolies™ store will be on Winter Break through part of January. It's time for me to relax, rethink, rejuvenate!

I thank you for your patronage and moral support during 2015. I'm greatly appreciative!


Wishing each of you a very Happy New Year and hoping for some Peace on Earth for 2016!

Don't leave your warm, comfortable home
to get up early,
tromp through bad weather,
and fight crowds to start shopping!

Stay in your pajamas,
sleep in,
and when you are ready,
ONLY when YOU are ready,
consider this... 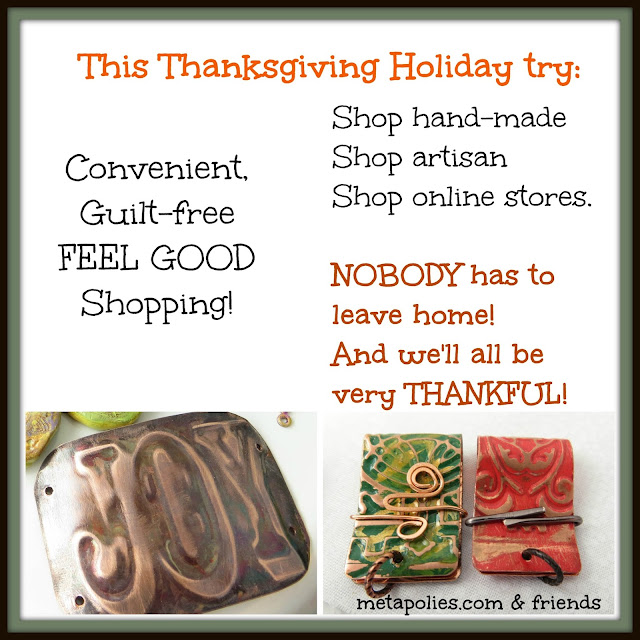 I even have a special incentive for YOU,
your family, and friends!

Enjoy your holiday at home,
where shopping is easy,
and snacks remain handy!

Wishing a Happy Thanksgiving
to all who celebrate!

I'm thankful for each of you! 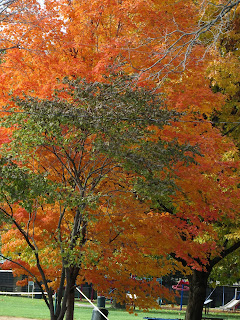 Autumn has arrived in Kansas and seems to be passing quickly! The trees are dropping their beautiful leaves at a pretty fast pace. So it must be time for the


My designs are nearly always inspired first by color, so you'll find a lot of those lovely Fall colors in my Metapolies™ components and jewelry!  Just take a quick look... 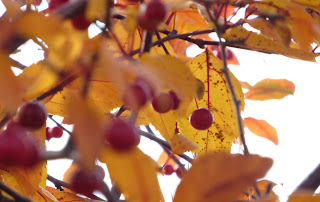 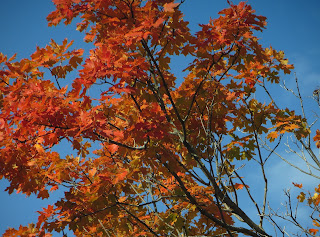 I hope you'll drop by my store and see more Fall-inspired items.  To further tempt you, there is a ... 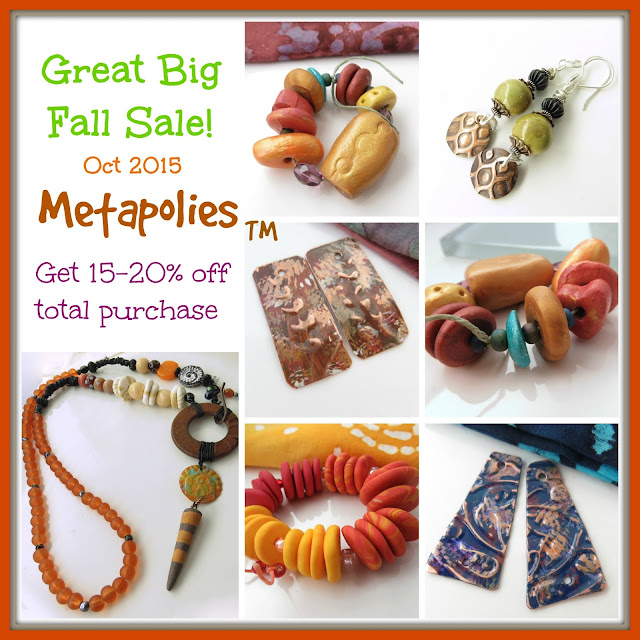 (Shipping charges and sales tax for Kansans are not included.   See store for complete details!)

Wishing you all a lovely Autumn!

How stunned I've felt today that I read that line on the 315th anniversary of his death.   I've felt a sting a bit like mourning a loss, or mourning the loss of some missed opportunity.

Alas, I've started at the end of the story (or at least the middle) and not the beginning.

First, let me warn you today's entry is not about jewelry at all.   (It appears to fall in the "...and Reflections" category of this blog, which allows me to write about jewelry and/or whatever else I'm thinking about on any given day!)

Next, let me ask, are you one of those people who prefer to watch a movie first or read a book (fiction or non-fiction)?     I can go either way, but must admit one thing, I often find myself inspired by a movie and wanting to learn more about the story, the characters, the history involved.   And so I delve into reading afterward.

It has happened to me twice in the last couple of weeks and I'm glad for it.

A couple of weeks ago, my two guys went exploring for 12 days in Glacier Park with other family members.   I wasn't feeling up to long car rides and remained home.   Determined not to be completely miserable the entire time, I ordered a few new movies from Amazon, creating my own little "vacation treat."

Two of the movies I ordered were:

1) Far from the Madding Crowd:

I had planned to see this movie at the theater but it didn't pan out.  I was familiar with the soundtrack (lovely) and had purchased that in advance.   I was so awed by this movie, that I had to read the novel I'd had sitting on my bookshelf for several years.   I so thoroughly enjoyed this in every format!   (I must note that I've linked to Amazon but am not in anyway connected  with them or promoting them.   I would encourage  you to check your local libraries and bookstores too if you are interested in purchasing.)

Like "Far From the Madding Crowd," "A Little Chaos" was one of THE best movies I've seen in ages.  (I had never heard of  Matthias Schoenaerts before these movies arrived and didn't realize they starred this same actor until removing the DVDs from the box they were mailed in!  Must say, I'm a new fan!)   The music is completely mesmerizing--calming, exciting, intertwining with the theme of the story, just as any great soundtrack should, yet music I find I can listen to again and again.   (And that is very rare for me.)  The  phrase "It comes from the heavens" gets used  several times in this film, and fits the movie and the music perfectly!   It sounds like musical water...

While "Far from the Madding Crowd"  is a wonderful (and close) adaptation of Hardy's novel, "A Little Chaos" is fictional but contains many characters (not all) who once lived.   This brings me to my recent fascination  with  André Le Nôtre.   He was in the movie, as in real-life, the gardener to the French King Louis XIV, often called "The Sun King."   (In case you need a quick brush-up on European history, that's 2 kings before Louis XVI who was married to Marie Antoinette.  Both were taken from Versailles and later executed.   I'm  not giving away ANY of this story by reminding you of that!   ...And, if you've never seen this movie, give it a try!)

Le Nôtre combined geometry, art, engineering and gardening to create the architecturally stunning gardens and reflecting water ways at Versailles and other very notable residences in and around  Paris.    While working very closely with the King, he managed to maintain a mostly positive relationship with him and others at court and beyond (as if his other jobs weren't full time enough)!

What an inspiring life!  What amazing accomplishments in so many ways.  What people to have walked among, conversed with, worked creatively with, and what a time to have lived!

While there is not much evidence for a full-scale biography, the bits that remain do tell an interesting story, and I'm happy to be in the middle of discovering it.

I can't say it's over just yet!

Thanks for joining me today!  Best wishes and many inspiring moments to you all!

P.S.   Please share if you've seen Le Notre's work at Versailles or elsewhere!   ....Or let us know if you prefer to read a book or watch a movie adaptation first!   ...Let us know if you love gardening!  Heck,... whatever!

I'm doing some restructuring of the Metapolies™ store on  Etsy in the next day or two, and I'll be refreshing the collections too!

I'm planning to leave the store open while I make changes, so if you have questions or are looking for something and can't find it, please leave me a note on Etsy.   I'll be happy to help!

I'll make an announcement when I've got everything in place and will encourage you will come take a look!   I hope you will like the changes and new, more focused collections!


As always, thanks for your support during this time!

Even new Summer/Fall 2015 designs are reduced! For other pieces, it's the last chance before I withdraw them from the store. Look for  "low as I can go" prices!

All these and more!  Prices as low as $20!
Treat yourself or treat a friend!

***
Clip art from wpclipart.com
Photos and jewelry by Sharyl
***

All JEWELRY items are on sale,
most drastically reduced! 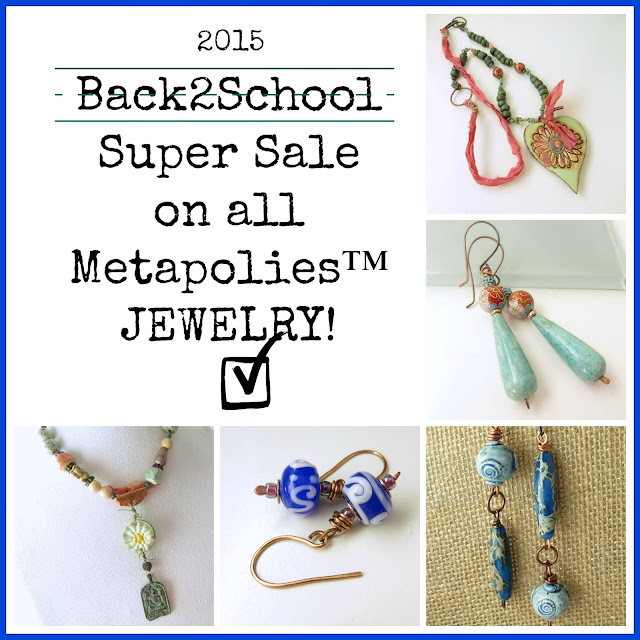 Just because "Back-to-school" time has always been one of my very favorite times of the year, from grade-school through university, I couldn't help celebrating with all of you this Fall!

Prices shown are the sale prices. You will typically find the original price in the description.  No coupon code needed this time!

Treat yourself or treat another to a special piece of one-of-a-kind artisan-made jewelry!

*****
Photos and jewelry by Sharyl
Graphics from wpclipart.com
*****

My thanks to all who joined in the July 4th Give-away!   The winner of the earrings is: 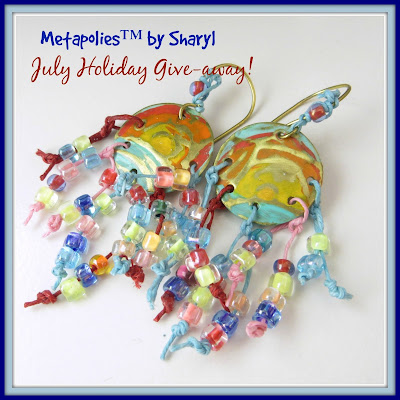 Hope each of you had a nice weekend!

I'll also post a quick reminder that the sale at Metapolies™ continues until July 10th:

Get 20% OFF all items
(jewelry, polymer clay beads, and
metal components)
with code:
INDEPENDENCE

Thanks to all of you who have recently made purchases!   Newest items added: 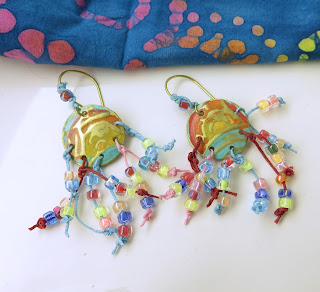 I had a sunrise/sunset scene in mind as I created these brass components,...then as I designed the earrings, I drew my inspiration from a rainbow.
But today, I'm thinking all these colors could also be spectacular fireworks,..   (yes, very quiet ones)!

Then, finally, I got inspired to celebrate the July 4th holiday by giving these away!   (In the spirit of World Peace, I will send these internationally too, so please join in  the fun if you like!) 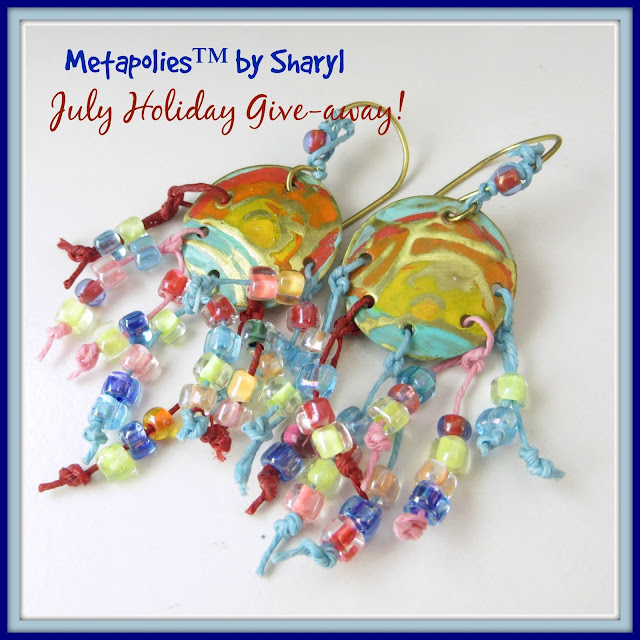 If you would like to signup for this Give-away,...

You can get a 2nd change to win if you share the news with others and tell me where you posted it!

***
Photos by Sharyl
Other graphics from wpclipart.com

Use coupon code INDEPENDENCE now through July 10 to get 20% off all items purchased from my Metapolies™ store on Etsy!

U.S. friends, if you celebrate the July 4th holiday, what are your plans?   We're quite folks, so we'll probably throw a veggie burger on the grill!  :-)

Wherever you are, have a great weekend!  ~Sharyl