I purchased some 18-gauge "soft" wire a few days ago and was excited to give it try.  I had read about it before, but not worked with it.   Upon trying it out, I was at first thrilled, then disappointed, then happy to have discovered it!    I'll explain... 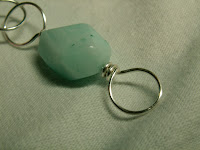 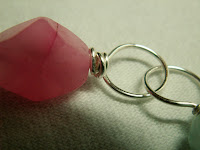 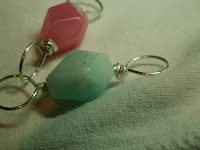 After experimenting a bit, I found that the project, above, is one example of where this soft, heavy-gauge wire will be useful.   I was using two pieces of dyed quartz I had.  I'm not sure what this piece will be "when it grows up."  I'm thinking of getting a few more pieces of quartz in similar shapes and colors and linking to make a necklace.
Keep watching...   You may find it on my website one day soon!
Sharyl's Jewelry, "Necklace" section
Posted by Sharyl at 3:20 AM