It's been a while since we had a submission from Krista, but I'm so very glad she sent me this one to share with you!     (Hope more of you, especially anyone currently without a blog of your own, will do the very same so we can see some of your work!)

Traditional mala made from Rudraksha beads are not a typical piece of jewelry.  In fact,  they may not be considered  jewelry at all, though they are often worn.   They are prayer beads used in some branches of Hindu religion and in Buddhism.  Similar to  prayer beads used in other religious traditions (such as Catholic rosaries), mala can be used to count or keep track of prayers.


The Rudraksha is a type of rough seed, and  a mala (the prayer bead chain) consists of 30-108 beads, depending on the religious tradition and the devotee's needs.  The origin of the religious tradition surrounding these beads seems to begin with a story of Shiva from the Vedic scriptures, but the date is widely disputed.  Later, they became a part of Buddhism tradition as well.


Now,  a look at what Krista sent!  Krista's piece is not a traditional mala, but is in fact a necklace which she designed as a gift.  It is made in the style of a mala and contains 108 beads, but she has integrated Rudraksha seeds with other beads. 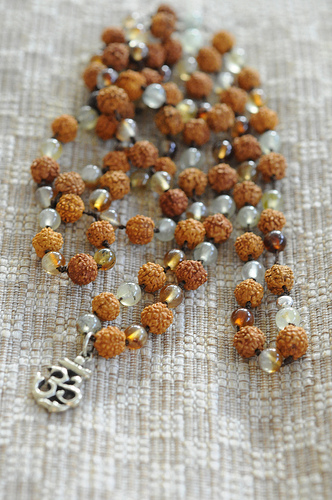 These Rudraksha beads are special in another way too.
They were sent to Krista from Singapore by a cousin. 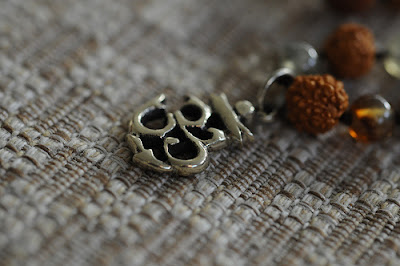 The pendant is an "Om" symbol.
For more information on traditional prayer beads, including mala, a short summary can be found at the Museum of  Anthropology, University of Missouri, Columbia.   Another source for cultural and religious comparisons of prayer beads is available through the "Prayer In America" community resource guide from  NPR in connection with Iowa Public Television. (page 145)
I hope you'll take time to explore this ancient religious symbol and tradition.  If you have comments, corrections, or additional information to share on this topic, please do!
Thank you, Krista, for sharing these photographs with us!
Peace and good wishes to all!
~Sharyl / Sharyl's Jewelry
* * * * * * * *
P.S.  If you are looking for the link to comment to in order to be entered in the drawing for the "More Skye Jewels" tile, please click here!  You may comment until Thursday night when MY clock, in Central Standard time, hits midnight to be entered in the drawing.  Please indicate in your comment that you want to be included in the drawing.  Many thanks!
* * * * * * * *
Posted by Sharyl at 4:22 AM

They are indeed considered to be sacred. My mother brought one for me from ManSarovar! That is suposd to be one of the HOLIEST places for Hindus...it is at 15000 ft above sea level, very difficult pilgrimage for the aged. Mom got one for me from there and asked me to wear it everyday for good luck. I guess I should wear it!

Thank you for including my jewelry in your post. My sister wears her beads everyday. She says they give her peace. I am so thankful to my cousin for sending them to me, as well. They are not easy to find in the US, if you can find them at all!

Thank you again, Krista, for sharing this piece with our group. It was certainly a chance for me to learn more about the similarities and diversity of prayer beads across cultures. Your mala-inspired necklace started that discussion, and I thank you for it!

Kashmira, I want to thank you for posting your response here and on Facebook. It furthered our understanding of mala beads and their sacredness to many. I deeply appreciate that.

awesome and very informative post thanks for sharing
navratan