I have an interesting story to share with you.  It's not mine, but comes from a friend of this blog, Tracy Bell.   Tracy has been featured here on a number of occasions, but I admit, it's been too long since the last time.


Tracy is one of the most talented jewelry artists I know.  It seems that when she makes jewelry, every scrap of it is made by her own hands.  (I can actually say "scrap" because often what she begins with are scraps of copper that she turns into beautiful, unusual jewelry!)


So lately, I've been following a story that she has been telling on her blog, "Copper, Glass and Recycled Trash," as it unfolds.    I found it so interesting, I wanted to share it with all of you!


Now, in singing the praises of Tracy's work with metals, I failed to mention that she makes lampwork beads for her creations too.   If you've never seen her work before, take a quick peak into her "TracyBell" shop on Etsy before we begin.


This particular story centers around a "40 Dots Only Bead Challenge" hosted by Heather Trimlett.  The basic idea was to chose 2 colors and make 40 different beads using only dots. 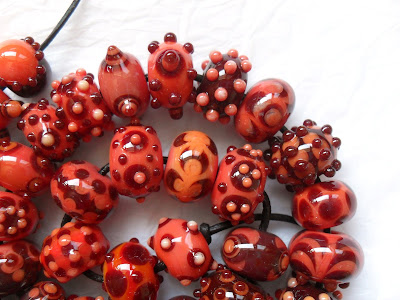 I'm thinking this sounds impossible already, but Tracy reports that she didn't think it would be that hard in the beginning, "but after the first 20 it got tough."   I'd like you to read Tracy's blog entry (Monday, April 23, 2012) to see how she managed to come up with 40 of these beauties! 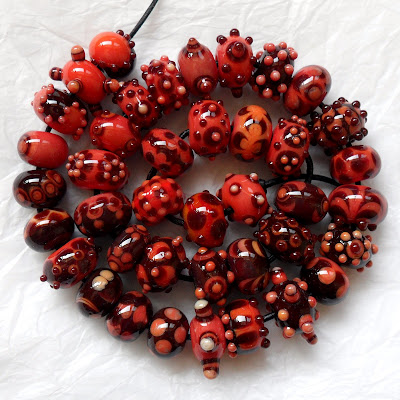 It seems like these 40 beautiful beads finished would be the end of the story, but it's really only the beginning! Having finished, she learns that according to the rules of the challenge, the dots were to be melted in rather than raised!

"Honestly I don't have any problems making all melted in dots. My problem lies with leaving all the dots up and the same size not half melted in and half still standing." So the challenge was still a valuable learning experience AND she ended up with this great string of beads! What to do next?...

"What to do with 40 different dot beads?"

"Once I had all my beads done I knew they could never be parted and I started to think of things I could incorporate them into that would keep them as a set that could be worn." In her blog entry  (Wed, June 6, 2012), she contemplates her choices. I hope you'll read the entry for the full story!

She makes 2 attempts at a necklace, both gorgeous, but this is the final design: 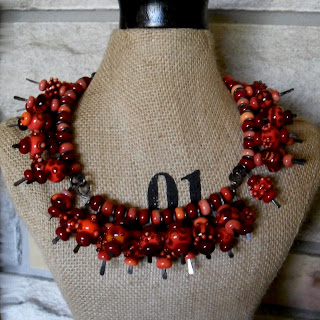 Made into three sections to accommodate all the beads and distribute the weight comfortably and in such a lovely way!

Oh golly, if only I could ever misread project directions and end up with results like this!  I would be so very pleased with myself!

As it is, I'm pleased as can be for Tracy and her beautiful beads and necklace!  And I thank her for letting me share her story and photos with you all today!

Best wishes with all YOUR creations!

P.S.  I've been adding new items
to the Studio in the last few days!
Visit Sharyl's Jewelry
to see the latest!
I've also restocked the
"On Sale Now" section.
The "Wedding and Special Events" jewelry
continues to be on sale
through the end of June!

I am so glad you loved my necklace so much, someday we are going to meet and person and you will be able to wear my creation :) I wore it to Bead and Button with my orange shirt and got a lot of positive feedback.

Ooo, I love the very thought of getting to try this on! I'd feel like royalty! Thanks Tracy! Continue enjoying that lovely necklace! --Sharyl

That is truly amazing. I love all the different beads and that necklace is really something special.