i heart macro: And the Rain Finally Came

I've been out a few weeks.  When I last posted, it was the week after the drought photos and I had gone back to showing Colorado summer vacation photos rather than continue showing cracked dirt, which admittedly was pretty depressing. 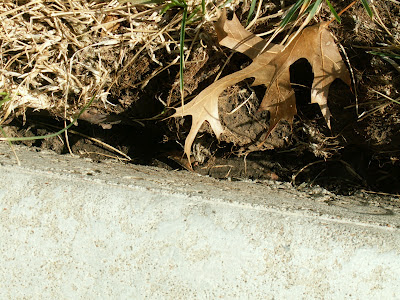 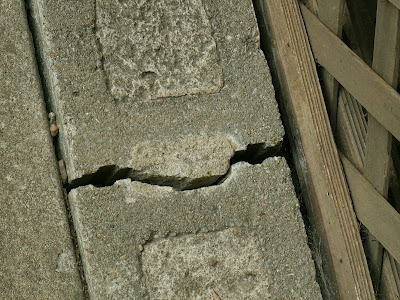 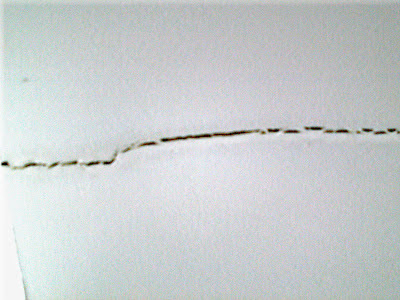 ...and cracked ceilings
and stuck doors)...

...had actually been the state of things all summer.  We were just trying to ignore it.

When we started falling down the holes, tripping over the cracks in sidewalks, and poking holes in the bottoms of our shoes from the dried grass (...why yes, I did make up 1 out of 3 of those), we finally admitted to ourselves that it had gotten too danged dry.

I heard jokes about washing cars more often, leaving car windows rolled down, and hanging laundry outside to dry--things we normally joke about bringing on rain, hoping that it would.  Finally, even I did something I never do, and that was wish for rain.   I'd much rather have a sunny day than a dark cloudy wet one.... until now.

Well fortunately, our luck has been slowly edging in the right direction again.  And I have  some strange--if not always good quality--photos to show you!

One day, about 2 weeks ago, it rained "this much" but like a baby's first steps, we were so thrilled, I rushed out and took this photo of the drops coming down and changed my personal banner on Facebook for the first time since I started it! 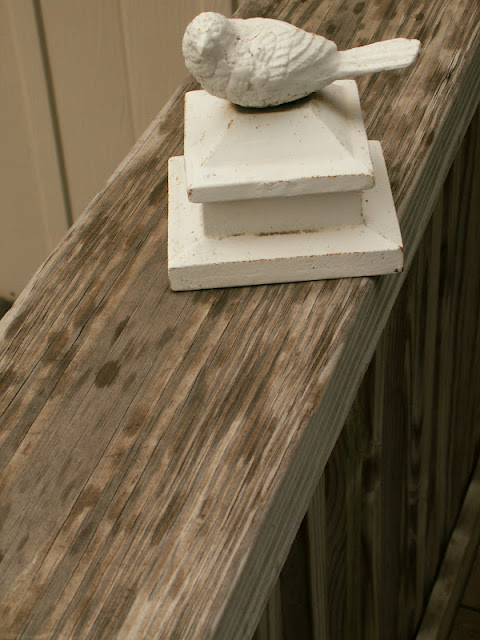 Another week later, still parched, this one came along.  Barely better, but it had more hope behind it... 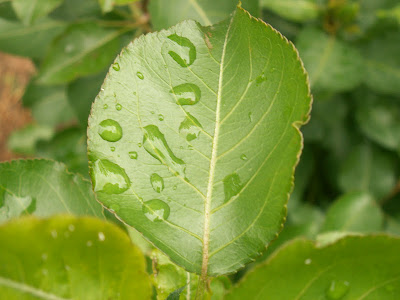 And yes, we are talking about another big deal event here with Sharyl running to grab her camera, out in the "pouring" rain to snap a shot before it ended and evaporated! 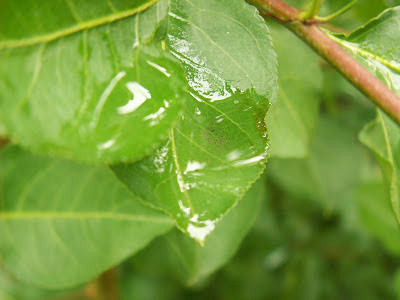 Oh yes, and the 2nd big wing-ding-deal about this--the Facebook banner was changed again so the world would know it had rained in our corner of Kansas.

Have you ever been afraid to wish for something for fear something else bad might happen as a result?  (Well, we won't go there, ...) but it is unfortunate that it was the hurricane that hit Louisiana and Mississippi so badly that finally brought us needed moisture.

After destruction in the South, it brought some life back to the midwest... the result of our first real rain in many months. 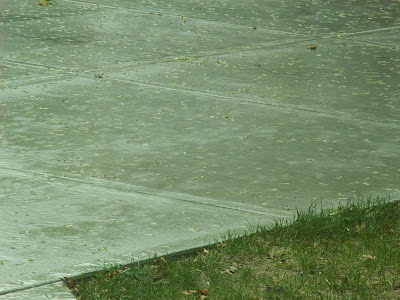 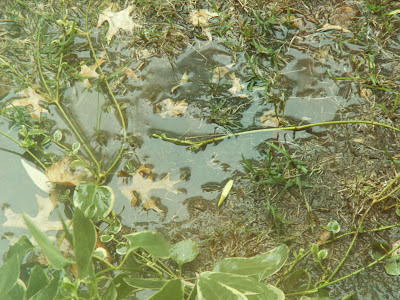 Can you believe it?  A puddle?!  I didn't even go outside to take these photos.  It's plenty clear what's going on here.  And look how the dead grass is suddenly turning green again!  How does it do that so quickly?!

The wind picked up quite a bit and tree limbs were blowing around, so these next ones are "abstract," but I liked them anyway. 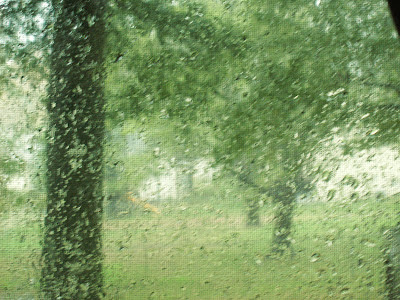 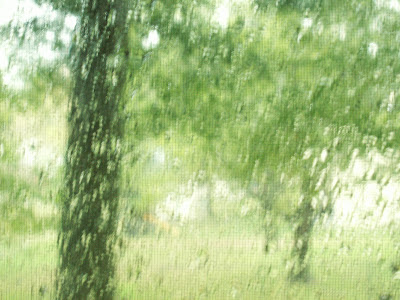 This feels like our "second Spring."  I kept saying we needed a 2nd one.

But what if it were like this every year?   Barely any winter, dry and fairly warm.   Spring in winter.  Hot, hot, too dry summers with crops (as well as flower gardens) destroyed.  Homes and other buildings, roads, natural gas lines all with structural damage.   Then when it's time for Fall, it turns to Spring again.   Now that sounds surreal.  It sounds like real climate change.   And I think I had better be careful what I wish for...

Thank you for entertaining my musings about weather twice now.  It's really not something I normally think about--unless an ice storm knocks the power out for a couple of weeks--then you might get a complaint out of me. ;-)

Hope you have a good, lovely, just-right- weather kind of Autumn!

Now lets go see if anyone has lovely nature photos over at Studio Waterstone!

I just got up, stepped outside-- and spooky as it is to report, the grass needs mowing and the daylilies have popped out of the ground and are up about 5".    ("Spooky" because I stayed up much of the night writing this entry about the "2nd Spring!")

We can experience Spring the same time as our Australia family and friends this year.

Question:  Do you see this as cause for celebration or cause for concern?

I'd love to hear your take on this!

I am so glad rain has finally come for you. We had drought for 10 years and a year ago in Summer, the railway lines buckled!! This last year has seen catchments almost filled with rain long before Winter, so even if it is very hot next Summer there should be no water restrictions. After years with no proper rain, I love the sound and look of it! Hope you get some more soon.
jenni

I'm very happy for you! We drove from Maryland to Denver last month and my heart broke when I saw the effects of the drought. I think I would have been out there splashing in the puddles!

Jenni, I know you all have been through terrible droughts for many years. Buckled railways lines are a pretty dramatic example of what will happen!

I know the farmers have been hit worst here. I really have not been so much personally effected except that things they are a shifting. On the news was a person's house that nearly blew up due to a damaged natural gas line.

I think for me it has just caught my attention as one of the most extended bizarre weather patterns I've ever lived through. And it just doesn't "feel right." Everything was brown for months when it should have been green. It feels like the earth is a bit off course.

I am glad to see the rain, and have learned to appreciate the weather more and how it impacts other people and the world around me.

And when I hear you speak of a drought for 10 years, I now have a whole new imagination and appreciation for what that might be like. Thanks for writing and hope you see the rain too! --Sharyl

glad your rain came. i love your "this much" photo. the little soaked in drops are great.

It's been raining A LOT this summer here in Finland!

You're too funny Sharyl :) Spooked out, huh?

I loved the last two pictures in your list..the surreal ones.

And I think its a cause for concern :(

Okay, I gotta say you're crackin' me up w/the 'droplet' photos - cause that's how I'd be and can totally relate!! Your writing was good enough that I got a visual!
:-)
Glad you got some much needed rain and some great photos! Have great week!