You may or may not recall that when I started this blog last year, my photos were pretty darn awful.  No, not being modest.  They were embarrassingly awful.   Most of them had a pink hue. They were not much in focus, and they were dark, unless I lightened them to an unnatural looking blue-hue.  I kid you not.  I'll find one for you now.

And my point isn't that now I'm so great I get to brag, because I still have a long way to go.   But I've been on an interesting journey.   And because a journey can take so long, sometimes we forget how far we've traveled.   So I thought I take a moment today to show you a few of the photographic "phases" I've gone through these past months.

Following that initial dark pink and blue phase, I tried getting more light on the areas where I was taking photos in  my office/studio.  I set up two lamps, started using white cloth (rather than various colors) as backgrounds, set the light on the camera as high as it would go, and learned to use the close-up focus.  (You can tell I'm still so home-taught I don't know all the real names for things, I just know I need an "S" and a Tulip icon to show up to make it work!  Thank goodness I learned that!   Bad news was, the photos still appeared too dark, even when I tried to lighten them afterward.)
I knew I needed a lightbox, but that didn't seem very possible at the time, and I started learning how outdoor photography and natural lighting were becoming more popular anyway.  So I grabbed my camera and headed out of doors!
I had very mixed luck--as I often spoke about here on the blog.   Some photos pleased me: 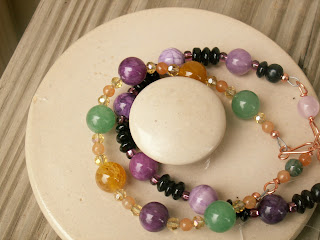 And others, I just couldn't figure out how much light to use, which direction to shoot, or where I should be.  Shadows were another problem. 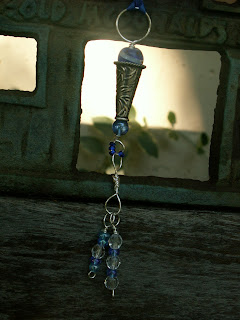 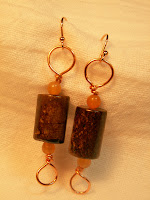 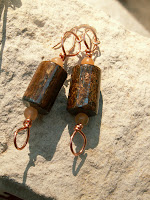 Then the weather became cold and I had to move indoors again.  I began experimenting with props in the photos.  Some of my favorites were some ivory-colored sea shells.   It seemed to work at times and at others, I would have the same old pink/blue lighting problems. 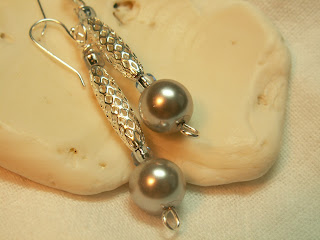 I think this one actually turned out better than most.
But even though so many of my outdoor shots had turned out poorly, I felt that most of my best shots had been taken outside.  I had to find a way to replicate that natural light indoors.
Then it occurred to me one day that I could.   We have a nice large beautiful window in the living room that was installed last year.   Where we once had blinds, we put up sheer ivory curtains to filter, but not keep out, the light.  I gave it a try with my jewelry.   And it was SUCH an improvement! 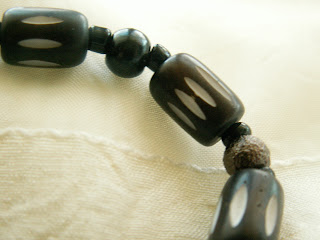 Remember this bracelet from above? 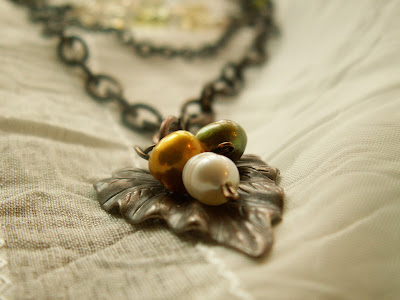 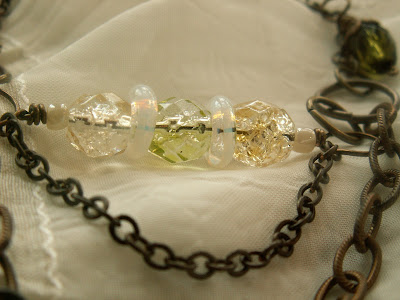 These 2 photos are of a necklace
I entered in an Art Bead Scene Challenge.
Posted by Sharyl at 1:29 AM

Hi Sharyl! Full marks for sticking with it and experimenting with your camera. I get the suggestions re the curtaining becoming distracting ..or reflections similarly. I quite liked the (green beads, stone beads) drop earrings on the cream muslin, but yes the pattern is a hindrance. Maybe you could make a very lightly padded board that is covered in an appropriate off-white to cream linen or such. If it worked, you have your prop ready every time/without creases! I'd also think of making a second one, but covered in black velvet. You shouldn't get any shadows! Try it also, with a flash. You might get nice lights from your jewellery? Have you got one of those 'day-light' lamps? Other forms of indoor lighting can confuse your camera. The photographic challenge sounds like fun.

Hi Sharyl, I can definitely see a difference in your "pink period" photos and the newer ones. I liked the bracelet on the muslin and
the silver and pearl earring photo. I read somewhere that floor tiles make good backgrounds (and you can single buy 12 inch tiles at Home Depot/Lowes are pretty cheaply). I agree with Carole that lighting helps lower the shadows. You might have to play around, but I bet the results would be worth it. I'd be interested in a photo challenge. I am terrible at photographing single beads or piles of beads. I could definitely use the practice. :)

Thanks to both of you for taking the time to leave such thoughtful, helpful comments! I appreciate it tremendously! I'll be trying out all your suggestions, you can count on that!

Glad you are both interested in the bead-photo-challenge! That makes 3 of us, at least! :-)

I just noticed something funny about those last photos, taken on the plate. (Not "funny" as in "ha-ha" but more like as in "uh-oh!") Anyone notice how BLUE the white plate looks? Have I just come full-circle to my "pink-blue period?"

P.S. I will say that photos always look a shade odd on this blog. Not sure if it's because of that creamy background or what.

Your photos have come a long way! Much better and clearer. I like the challenge idea - I probably can't participate at this time (my day job is really needing my full attention), but I'll bet a lot of people would enjoy it!

What a wonderful article. I am amazed to see thr progress of your photographs. I am sure this will help so many people.

Thanks to Paul, and all the rest of you, for your wonderful support! I truly appreciate it.

And thanks to A. for my very first photo tips and to K., for helping me get out of the "pink" stage!